The Fundamentals of Walk Cycle Animation 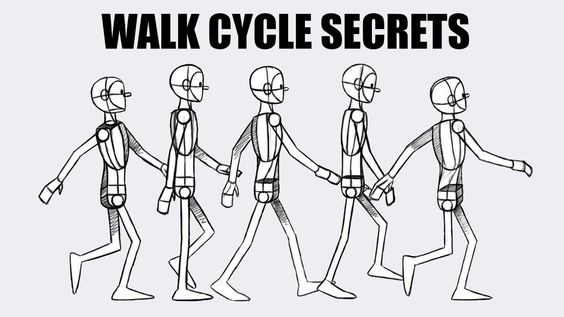 Understanding the Basics of a Walk Cycle

A walk cycle is a repeating sequence of frames in animation that depict a character or object walking. The walk cycle is one of the most important fundamental actions in animation and is used as the basis for many other actions such as running, jumping, and dancing.

The Importance of Timing and Spacing

Once the keyframes are in place, the animator will create in-between frames, also known as “breakdown” frames. These frames are placed between the keyframes and help to smooth out the motion, making the walk cycle appear more natural. In addition to creating the in-between frames, the animator will also pay attention to the timing and spacing of the walk cycle. The timing refers to the amount of time it takes for one step to be completed and the next step to begin. The spacing refers to the distance between the character or object’s feet as it steps. A good walk cycle animation should have consistent timing and spacing throughout.

Weight and Balance and Secondary Actions

Another important aspect of walk cycle animation is weight and balance. The animator needs to make sure that the character or object’s weight is shifted correctly as it takes each step, and that it maintains a sense of balance. This can be achieved by paying attention to the character or object’s center of gravity and how it moves throughout the walk cycle. Additionally, animators will add secondary actions to the walk cycle animation. These are smaller movements that occur in addition to the main action of the walk. They help to add life and personality to the animation, such as arm swings, head turns, and the body leans.

In addition, animators will also pay attention to the overlapping actions, which are the actions that occur simultaneously with the main action. For example, while a character is taking a step forward, the opposite arm will move backward and the opposite leg will lift. This gives the animation a more natural look and makes the character look more alive.

Furthermore, the animator will have to pay attention to the arcs of motion. Arcs are the paths that the different parts of the character’s body follow during the animation. Natural movements follow arcs, and by making sure that the arcs are correct, the animation will look more realistic.

In conclusion, creating a walk cycle animation is a multi-step process that requires a great deal of attention to detail. It requires understanding the basics of a walk cycle, paying attention to timing and spacing, ensuring weight and balance, adding secondary actions and overlapping actions, and making sure that the arcs of motion are correct. However, with proper planning and execution, the final animation will be a realistic and dynamic representation of the character or object walking. Walk cycle animation is a fundamental action in animation and is used as the basis for many other actions, making it an important skill for animators to master.

Michael Cainehttps://amirarticles.com
Previous article
What is the use of Direct Mail Marketing in the Financial Industry?
Next article
How to Build Dog Houses?

Online gambling became a reality in 1994, a year after scientist...

Diamonds are infamous around the world for their rarity and their...

DefinitionMedjool dates are one of the world’s most beloved fruits. With...

If you’re looking for the best pre-built gaming PC for CS:GO,...